Something I wrote 2 years ago that still has relevance to the Warrior and Peacemaker path today.

Around mid 2012, I had a writer for Discovery Channel Magazine call me from Singapore to interview me about Maori warrior arts. I had done my Masters of Philosophy on Maori Warrior Arts and Strategy as well as being former Kiwi Army officer, trained in unarmed combat and blah blah. During my time in the NZ Army in 1994, I had led an Army project team which researched the Maori taiaha as a viable close quarter battle weapon which could form an integral part of the NZ Army culture called Ngati Tumatauenga. This writer had been referred to me by a former colleague who is a prominent Maori war historian. 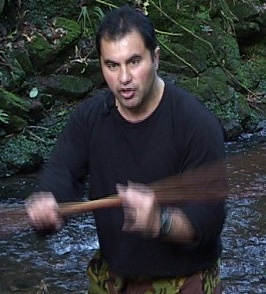 I was reluctant initially because every warrior style is relevant to its culture, its environment, its lifeforce. This emphasis on pure combat, who is the best warrior has always struck me as odd. The last man standing. So macho. Bit like the Mixed Martial Arts inside cages. Gladiator Entertainment. One UFC Blockhead bashing another Blockhead for multi-million dollar payouts. Bored viewers getting armchair rage. Meanwhile children starve and die each minute.

Something needs to change. We need something bigger than video war games and reality combat entertainment. This psychology also feeds the Industrial-Military Complex, the enormous Arms Industry and Global conflicts. At individual level we more likely to get road rage, TV rage, queue rage at MacDonalds than face an actual armed attack. You do the calculations. Work out the chances of being attacked physically. We will more likely suffer self-inflicted negative thoughts or emotional upsets than getting shot today.  This is the time to serve something bigger than just being a video game warrior and Facebook troll.

Kids particularly boys are spending more time being warriors on video games. Getting extra weapons for killing more people. Go back a stage if you get killed then resurrect your character. Lots of blood, severed limbs, burnt bodies. In real life, getting cut, burnt and bashed still hurts and kills. Wake up. But kids just act out what they see in video games, movies and TV.

This global market for gratuitous violence and multiple entertainment is what was really driving the Discovery Magazine article in my opinion. More views. Follow the money.

I asked the interviewer, “I don’t want to hype up the Maori warrior – the myth or the reality. Nor diminish any of the other warrior cultures. The greatest living warrior will one day die as surely as the sun sets this day. Just another memory beneath the sands of time. I look at the modern world, what is the point of being the greatest warrior race on a dying planet”? Is not the greater global battle the one where we unite to defeat our own predatorial behaviours and heal our own aggression towards the Earth and each other. Save the oceans, forests, rivers and eco-systems of the planet. Where is the Shaolin warrior to defend the dying rivers of China, the Yellow River and Yangtze River. Or the Dayak to defend the diminishing rainforests of Borneo and Sumatra, the Orangatang and Sumatra Tiger? Or the Sumo warrior protecting the Japanese children from Fukoshima nuclear radiation? Or the Maori warrior defending his tribal seabeds from oil drilling. Yes, they exist but not in the traditional warrior image carrying weapons of war. It is less about the tradition but more about the spirit. The Shaolin Iron Palm becomes more than a physical strike but a spiritual one. The Dayak Blowpipe, the Sumo Stance, the Ninja Shurikan throwing star, Samurai Sword and Maori Taiaha all become symbols of justice and spiritual strength that collectively unite to protect the waters, forests, lands and living creatures from corporations and profiteers.

We all have a part to play in helping the indigenous native peoples defend their natural heritage. When the last Sumatran Tiger roars its last call and the Orangatang its final breath, a sadness passes over us all. A sadness of the soul. At the passing of such noble creatures. This is why the warrior spirit, the defender of life itself must arise within us all. Not just one race. Nor tribe. Nor group. But the joining together in the name of life itself.

The definition of warrior is more than physical combat. It is more subtle. It can involve legal combat against corporations. Governments. It can be the workplace. In a classroom. At home. Or against racism. Or sexism. Or tribalism. Or religion. Or corruption. Or the simple act of surviving. Feeding your family. The struggles of life itself.

The interviewer missed my point…